2017 in Adelaide was looking bleak for ballet lovers, with the renovations to the Festival Theatre seemingly depriving us from witnessing the nation’s finest, the Australian Ballet.


A duck of a year has become a swan now though, as the Adelaide Entertainment Centre hosts the tights and tutus for the first time ever for the Adelaide Gala Spectacular.

SA will be the envy of the Eastern states when it becomes the “centre of ballet in Australia for three days”, according to Artistic Director David McAllister. As a one-of-a-kind event, he has already heard that it will attract tourists from across the continent.

“I know that there’s some Melbourne people that are a bit jealous and are going to have to fly over to see it.” While most full-length ballets feature a rotating cast, this event will feature the same galaxy of stars in every performance.

“It’s a real thrill to be able to bring some of our best pieces along and also have all of our principle artists featured in the programme; so everyone that sees the programme on the three performances will see the same cast. Sometimes people get disappointed when they don’t see one of the dancers that they like whereas with this programme they get to see everyone doing everything. So it’s a bit of an all-star cast every night.”

While the 4,000 seat venue will be larger than normal, the Gala Spectacular, by design, will appeal to ballet virgins, as David explains.

“It’s one of those perfect opportunities, if you’ve never seen a ballet before; it’s a bit like a tasting menu. All of the best bits of all the different ballets and you don’t have to sit through the boring bits; not that there’s any boring bits!” There is plenty, though, to attract the devout aficionado as well, as the event will offer a glimpse of next year’s new production of ‘Spartacus’ as well as the revival of more obscure but revered works, including Serge Lifar’s ‘Suite en blanc’.

The work by Nifar, who extracted the score from the short-lived 1880s ballet ‘Namouna’, is a rarity that became part of the Australian repertoire over 30 years ago, David says.

“Not many other companies do it. It’s quite exclusive and it was staged for us by Serge Lifar himself who came out in the 1980s so it’s sort of authentically from the choreographer himself.”

As one of the few companies that performs the work, it has become a signature piece that Australian Ballet has taken around the globe. David examines the appeal of the piece, which has not been staged in Adelaide for over 20 years.

“[Namouna] wasn’t such a successful ballet but it was fantastic music so in the '40s, Serge Lifar just used a suite from the music and made this very abstract but beautiful classical ballet: 'Suite en blanc'. In such a large venue, it’s got lots of patterns and things that the corps de ballet do while the soloists are dancing around.” 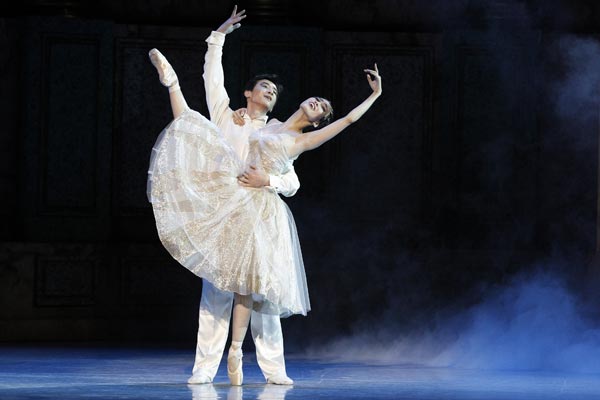 While the Adelaide Entertainment Centre is a large space, those accustomed to the venue should not be daunted; David offers assurance that an innovative use of the space will prevent it from becoming stadium ballet.

“We’ve put the stage half way up the arena so we’re going to have the seating horseshoe around the stage so it’s going to be fascinating to have audience all around us and the orchestra up the back.”

“Even though it’s a big venue, everyone’s going to be close up to the dancers.”

Tweet
« Die Fledermaus: State Opera Of South Australia Getting Revenge High Tide: An Exhibition As Part Of Fremantle Festival »
back to top