Futuristic and nostalgic, unsettling and hypnotising, complex and incredibly simple – ‘THREE’ is a mesmerising contradiction of the most intriguing kind.


Brought to you by the Australasian Dance Collective (ADC) and Queensland Performing Arts Centre, ‘THREE’ brings together choreographers Melanie Lane, Jack Lister and Hofesh Shechter who each share a distinctively different performance.

The world premiere opened with an emotional and joyous speech from the Artistic Director Amy Hollingsworth, who shared the turbulent journey of preparing to launch this time last year, the importance of embracing and encouraging creativity in volatile and uncertain times and the celebration of the final outcome. 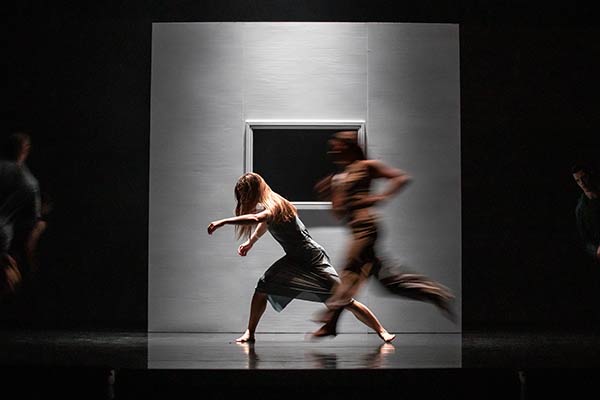 
Opening with ‘Alterum’, an unsettling piece choreographed by Melanie Lane who has asked the ADC dancers to dance like they have no bones. Their movements constantly undulating, their spines rippling as they weaved and waved through movements which are both incredibly unnerving and oddly satisfying. As with all art, the viewer is encouraged to make their own meaning of the piece, but Lane shared her vision for the piece as a celebration of the potential of the supernatural body. The costumes were futuristic – shiny, slippery, stretchy – matching the movements of the dancers bodies beautifully. The final element pulling it all together was the original score from Chris Clark, adding a powerful layer to an already nuanced performance.

Moving on, the audience sat absorbed and silent for ’Still Life’ by Jack Lister. Nostalgic, dream-like and evoking a quiet melancholy, this piece revolved around a wall with a space for a window. Or a painting. Or a hole into another room. The symbolism could be taken a number of different ways to each individual viewer. For Lister, it was to represent an art gallery, a space which has always felt sacred to him. The dancers brought the emotions evoked by art to life, but each seemed tinged with sadness. It was slightly ethereal and the dancers almost felt transparent themselves. As if we were getting a glimpse into a world where they existed as a mere idea or memory. 
Ending the night was 'Cult', choreographed by Hofesh Shechter, and it was like stepping from a faded memory into a hyper-real virtual reality of a parallel time. The music was loud, a voice-over boomed phrases that sounded familiar and the stage was shrouded in smoke as lit up letters were beamed on to the back wall, creating an eerie visual effect. The dancers reflected all this with bold movements, sharp shapes, and wearing bright red costumes and brown suits. The piece speaks to the conflict the world still faces as we struggle to balance culture and individuality.

Overall, these three works are incredibly different yet synergistically fit together. It is a celebration of the power of dance, and doesn’t shy away from asking the audience to stay connected even when it’s uncomfortable, even when it’s hard, even when it’s confronting and emotional. A show which will remind you what it feels like to be human, to be alive and what is possible when you embrace all of it without shutting down.