In the 12-month hiatus that followed the arrival of COVID, ADC has been busy developing new works, making films and nurturing the rising stars that make up the ADC Youth Ensemble which was established in 2019 by former Artistic Director Natalie Weir.

The young dancers (aged 15 to 18) have spent the past year working under the watchful eye of Ensemble Director, Riannon McLean, with input from numerous guest artists, including Richard Causer, Elise May, Yasim Coronado Veranes and Anastasia Woolmer, all of whom are former members of EDC.

‘Succession’ comprises 4 unique works with the 27 ensemble members sharing the stage with 5 company dancers who combine to produce a visually arresting programme with all 32 performers appearing on stage together.

The show opened with Riannon McLean’s ‘The Automaton’ which explores the notion of how we view the human form as a self-operating machine. Robotic movements combine with group formations to produce a dazzling display of arms and bodies. If Devo and Daft Punk had a love child this would be its mechanically-inspired offspring.

The surprise element of the night was the unveiling of Cass Mortimer Eipper’s film ‘Liminal’ which explores the concept of liminal space – an in-between space so to speak, where you are ‘on the verge’ of something new and between ‘what was’ and ‘what will be’. In this beautifully-shot and skilfully-edited film, a young woman explores her embodied self and with the help of the five other cast members delivers a captivating performance that focuses on self-discovery, aloneness and rebirth.

Shot in Brisbane’s Old Museum, ‘Liminal’ is one of two films ADC has produced during their enforced break. Featuring Chase Clegg-Robinson, Lonii Garnons-Williams, Bernhard Knauer, Jack Lister, Jake McLarnon and Josephine Weise, ‘Liminal’ is a stunning example of how the physical arts can transition successfully to visual media. 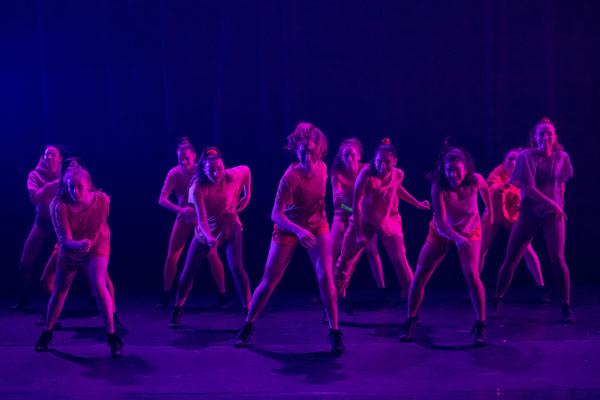 
Bernhard Knauer’s ‘Click’ is a brief dive into reality TV, social media and our relationship with technology and popular culture. Featuring 13 members of the Youth Ensemble, this short work could have been presented (or witnessed) in any lounge or nightclub in town. In this work, the performers create a sense of the voyeuristic and narcissistic behaviour associated with our online selves, giving the young dancers the opportunity to dance freestyle.

Lonii Garnons-Williams’, ‘A study of you and I’ is an exploration of our physical relationship to language and needs no explanation or translation.

‘Denise’ by former ADC dancer Jake McLarnon is a light hearted and humorous work which explores the scope of our collective and individual personalities. Using nothing more than a few white lines on black chalkboards, the dancers create multiple faces, personalities and moods with accompanying movements. Inspired by the classic children television series 'Mr. Squiggle', ‘Denise’ is a visually dynamic work with the use of yellow latex gloves adding a cartoon quality to the piece.

The only issues I had with the production was the venue, which is not suited to dance works given the stage height and low raked seating meant much of the floor work wasn’t within audience sight lines. Also, the lighting in some works was so low it was difficult to see the movements without straining.

Despite these minor (and rectifiable) shortcomings, the young performers delivered a polished show brimming with enthusiasm and physical prowess proving that ADC’s future is indeed bright. Bravo!