The first professional Brisbane-based production of Anton Chekhov’s ‘Uncle Vanya’ in 86 years is being performed by The Curators at Magda Community Artz. Director and Designer Michael Beh is in the midst of rehearsals.

A comedy, ‘Uncle Vanya’ takes place on a Russian estate sometime between 1895 and today with a university professor (Warwick Comber) returning to the country family estate with his younger vivacious wife Yelena (Lisa Hickey). A local doctor (Renaud Jadin) and the titular Uncle Vanya (David Paterson) fall under the spell of Yelena while the professor’s daughter Sonia (Sherri Smith) suffers from her own unrequited love.

In the small intimate setting of the bijou, the audience will see high emotions and deep passions play out. “On our last rehearsal I said to the actors, the scenes were thick with action and story. So often we’ve got eight people on stage in a family living room kind of situation where they’re all listening and responding to each other in different ways just like what happens in a family living room. When audiences come they’re going to be immersed in this incredible storytelling. They’re not going to be sure where to look on stage because there’s so much happening everywhere,” Michael enthuses. 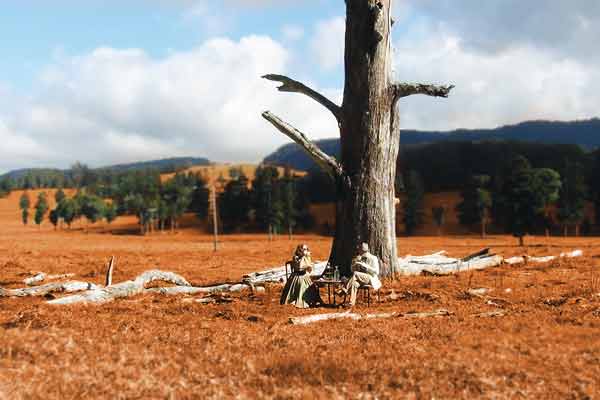 For the Director, seeds of his interest in the arts took root when he studied at the University of Queensland. From there he went to the Moscow Art Theatre School in Pittsburgh, U.S.A. where he worked with the legendary Adolph Shapiro. “I think my decision to do it for life was when I sat in the rehearsal room with Adolph Shapiro in Pittsburgh and he as a 65-year-old man stood on the stage and he actually stepped into a role that was being played by a young actress in her 20s and he became that character and he, in that moment, totally transformed. He became this woman and the hairs on the back of my neck stood up and people in the room started to cry. Because of his incredible energy and his understanding of character and story and meaning and the fact that theatre is about who we are.”

While the play hasn’t been mounted professionally in Brisbane in 86 years, Michael explains that the influence of Chekhov is everywhere. “I think Chekhov changed the way we in the west wrote or created drama. It [realism] creates the framework for film and TV that’s to come 50 years later. So he really is so important and he really only wrote four major plays and then died at a young age. These four great works, they dig so deeply into the human psyche, into our relationships and how we love each other and hate each other and get frightened by each other and how we express all of that. No one had written like that before and that’s what’s really important. Perhaps Shakespeare had written like that but he wrote it in a different way.” While Chekhov’s influence has remained relevant, the director is keen to make the venerable play accessible for modern audiences. “It’s these classic texts that we intend to explore and rearrange slightly so that contemporary Brisbane audiences can go 'I get that'. Because not a lot of people have read these plays these days and we don’t want them to die. We want to keep them alive.”