“’Aftermath’ is a collaborative dance/audio-visual experience,” Danny says, explaining the forthcoming phenomenon in his own words. “It’s a journey if you will. It’s quite dark. Experimental. It’s quite esoteric.

“It follows a lot of things leading to an 'event', and it shows the aftermath of that. It’s a dark, dystopian kind of world, sometimes an assault on the senses, other times it’s really quite beautiful.”

Danny continues saying that though the sensory ‘Aftermath’ provides a story, it’s not one that holds the audience’s hand. Like a lot of dance, he says, the performance is open to interpretation. “It’s open to be what you want it to be. I really think it’s something you have to see to understand.”

The best way to explain Danny’s involvement with the project is to consider him as a part of the performance.

“On stage I’m going to be performing various compositions for the show – it’s all new music specifically composed for the show, it’s pretty out there – [and] I’ll be on stage, tweaking knobs and fiddling with things as the show unfolds.”

Danny – who, aside from his work with The Kite String Tangle, has worked with other ensembles like the Queensland Symphony Orchestra (QSO) in the past – attests that this project has differed in not only his music writing approach, but how he collaborates with an ensemble.


“Even with the QSO – which was incredible, and definitely a bucket list moment for me – it’s also quite a bit more calculated when it’s with an orchestra, composed and scored and given to musicians to do on the day, but not a whole lot of collaboration leading up to the day.

“But for this [‘Aftermath’], we’ve been collaborating for almost six months already. I went to the studio space where they were doing the choreography, and I’ve been composing music they’ve been doing choreography to. Danny drew inspiration for the sonic involvement of the show not only from its mysterious and multifaceted storyline, but from experiences he had at the tail end of 2019 during a residency in Germany: “For me it was really timely, because by the end of 2019 I’d spent four months in Berlin, getting involved in that whole arts scene and space – it was really cool, really inspiring.

“I came back super inspired, and that’s when Jack and Amy [‘Aftermath’ writers Jack Lister and Amy Hollingsworth] hit me up about doing this and I was like, 'I would be so keen on doing something outside of The Kite String Tangle where I don’t have to think about vocals or lyrics. I can just go and do these sonic landscapes and push these boundaries of what people might expect from me or expect from a show in Brisbane'.

“The inspiration for this came from a lot of these European ambient and techno sounds, and a lot of the references Jack and Amy were giving me that they wanted to create were really in line with that, even before we’d had a conversation. We wanted to take it, to push it, take chances and be quite bold.”

Ultimately, by way of his contribution, ‘Aftermath’ is, for Danny, a culmination of his physical and musical experiences: “My experiences overseas, for sure, and also my musical taste, outside of the pop-leaning stuff, I’ve gotten to explore. A side that’s always been there but not explored in terms of composing.” 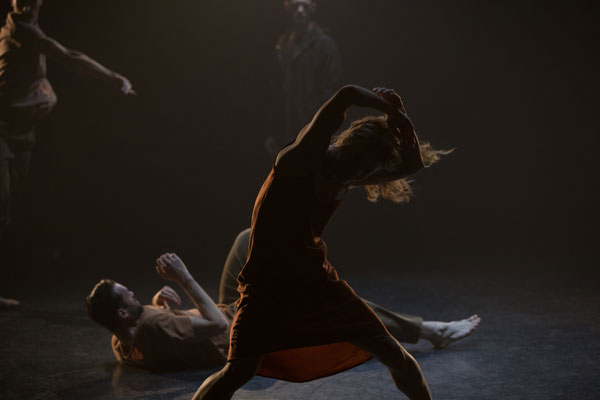 
With the opportunity of new creative territories, Danny allowed himself new liberties in compositional techniques.

“I’ve been working a bit with a modular synth which hasn’t made it on to too many records of mine – it’s a little more clinical than a normal synthesiser,” he says. “Patching things in and making weird sounds that way.”

“You can have longform pieces which can take you on an eight-minute journey rather than a two or three-minute song format.

“Also, the dynamic. It goes from 0 to 100 throughout the show multiple times. From really sparse sound design stuff to full on techno. That’s something I wouldn’t normally do, necessarily.”

That idea of journey within sound is yet another way in which Danny has cemented his own experiences in ‘Aftermath’, an interaction he had in Berlin contributing to his compositions and surfacing in the production’s audible features. “I went to a lot of nightclubs in Berlin, they’re sort of world famous for being pioneers in the club music space in techno,” Danny begins. “A lot of what I heard there I hadn’t necessarily heard before.

“Also, there’s so much collaboration in terms of music and art and visual stuff as well. I went to an amazing installation called ‘Deep Web’, an hour-long installation set to music with lights and mechanical things descending from the ceiling.

“Those kinds of things were stuff I was really trying to bring into what we’re doing here.” 
The style of Danny’s collaborative process between the show’s dancers is another aspect the musician has found to be a world away from his other ensemble endeavours. This, Danny says, has presented new challenges. “Dancers hear music differently,” he says. “What they call a big moment is not necessarily what I’m calling a big moment.”

“You use a different language as a dancer and a musician, so that’s been, I wouldn’t say challenging, but interesting.

“Things that would stick out to them as a moment for a great move is different to what I would hear. That’s been really interesting, and they don’t really know what’s possible and not possible and think of what they want musically with a blue sky. Then, I’ll have to catch myself and try and make it work. Little challenges, fun, good challenges.”

Danny says the idea of journey established before and during his time on ‘Aftermath’ may continue into other projects in the future. “With this thing, it’s given me liberties to push boundaries I wouldn’t normally push, or go more extreme with certain things, and I’m always surprised at how well they’re received.”

“Things you think are crazy or shouldn’t entertain, it tends not to be the case, so you can’t underestimate your audience. I think that’s something I’ll carry on to future compositions and projects.”