There are so many opinions about all kinds of things in the world.

But one debate in particular has sent shockwaves around the world: Is 'Love Actually' good or bad?

Lucky for us, Act/React's Amy Currie and Natalie Bochenski have kindly donated their time to put your mind at ease during Sydney Fringe, and help you figure out the constant back-and-forth in your mind about the film, in a show which presents both sides of the argument.

At the end of the show a verdict is reached based on the opinions of the crowd, and it differs from show to show.

Here, Amy talks about why she loves the film, and what audiences can expect from 'Love/Hate Actually'.

So, what’s 'Love/Hate Actually' all about?
It’s a two-woman comedy showdown that asks the most pressing question of our time: Is iconic 2003 rom-com 'Love Actually' the greatest movie ever made. . . Or a steaming pile of manipulative garbage? I think it’s a glorious, heartwarming celebration of love, but my good friend and fellow performer Natalie Bochenski disagrees. We spend an hour arguing our cases with plenty of heated debate, sketch comedy and audience involvement, then let the people decide in an extremely democratic voting process that involves throwing plastic hearts at our heads. 
How did you come up with the concept?
It’s based on a real argument that Nat and I have had many, many times over the years. As good friends, we agree on a lot – but not this! The film has always been a real Christmas favourite for me, but she’s always been quite vocal in her dislike of it. We’ve had a spirited discussion over its merits (or lack thereof) every year for over a decade, and realised we’d never come to an agreement on our own. As comedy writers and performers, the only logical conclusion was to write a show and let our audience give a verdict once and for all!

You recently performed the show at the Edinburgh Fringe. Tell us about that!
We’ve been overwhelmed by the response to the show! We’ve enjoyed great crowds, which is a dream come true for our first UK appearance, and we can confirm that the people of Scotland are just as passionate about the film as their Australian counterparts. Everyone seems to have an opinion! When not performing, we’ve been having an amazing time soaking up theatre and comedy from all around the world (and trying to work up the courage to eat a deep-fried Mars Bar).

Where else have you taken the show?
'Love/Hate Actually' debuted at Brisbane’s Wonderland Festival in 2017 (just in time for Christmas). Since then, we’ve played Perth, Adelaide, Melbourne, and Newcastle as well as regional tours and a return season in Brisbane. It’s been a wild ride! We were nominated for Best Comedy at the 2018 Perth Fringe World Festival, and won Best Comedy at the 2019 Newcastle Fringe Festival. We also performed a charity gig in Port Vila, Vanuatu for one night only. It was an incredible experience – and I had the surprise of my life when halfway through the show a local dog wandered in and joined me on stage for my monologue! 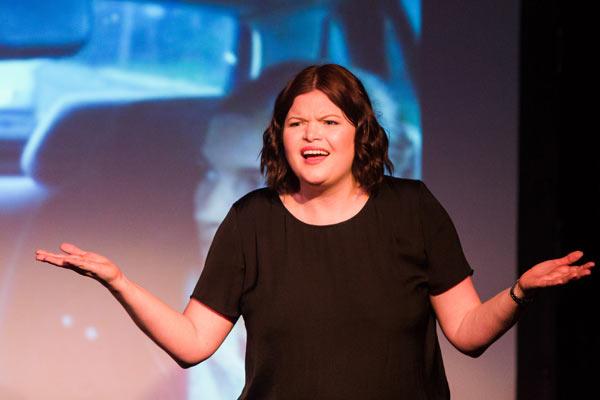 
Spill the beans, Amy: do you really love the film THAT MUCH?
It does have its questionable moments – and I’ll admit that Natalie makes some good points – but I still adore it. It’s a sweet, lighthearted festive romp with an amazing cast, it packs a surprising emotional punch (Emma Thompson and Alan Rickman, people!) and it always leaves me crying ugly, happy tears. It’s hard to believe it’s over 15 years old now – it’s really become a modern Christmas classic. Making fun of some of its sillier bits just makes me love it even more!

Do you have a favourite storyline?
While I (naturally) have a great fondness for Colin Firth, I think my favourite plot in 'Love Actually' is that of John and Judy, the stand-in body doubles in an adult film (played by Martin Freeman and Joanna Page). Their polite, awkward small talk in such a ridiculous situation is impossibly charming, and by the time they finally go on a date – on Christmas Eve, no less! – I can’t wipe the smile off my face.

Do you think Sydney audiences will be on your side, or on Natalie’s side?
I’m not sure what to expect! Most people have a real soft spot for the film, so love usually wins the day, but Natalie’s excellent arguments about some of its more troubling plot points have changed a few minds. Overall, love triumphs about three quarters of the time. Of course, some cities are much more cynical than others – Melbourne, for example, took great delight in agreeing with Natalie more often than not! I’m hoping Sydneysiders still believe in love.