A Simple Space Filled By Circus Company Gravity & Other Myths Gravity And Other Myths perform their show 'A Simple Space' at Perth and Adelaide Fringe. Image © Chris Herzfeld

Contemporary Circus Company Gravity & Other Myths (GOM) are performing their show ‘A Simple Space' in a string of dates early this year.


scenestr spoke to one of their performers and founding members Jascha Boyce who has been there since the beginning in Adelaide, 2009 when a group of friends founded GOM. Having performed the show more than 500 times across 24 countries, audiences can expect a contemporary circus show with a difference, with often less than a metre between an audience member and a performer.

“‘A Simple Space’ is a really up close and personal look at acrobatics and also at a group of friends who have been working together for a really long time. We created the show five years ago now and we all grew up together so we’re kind of like a big family and we really let the audience into our world a little bit. So the audience is really close, it’s probably the closest you’ve ever seen acrobatics before. So you can kind of feel the heat and the sweat and you can feel the struggles that we have. So it doesn’t have the glamour of a normal circus, but it’s actually real and honest and you can see us working hard. We have a lot of interactive moments with the audience and we go out into the crowd." Jascha fell in love with circus at the age of four and has been training and performing her whole life, seeing a lot of changes to the art form where companies like Cirque du Soleil, Circa and The 7 Fingers “kind of paved the way for contemporary circus around the world”. Gravity & Other Myths, though, position themselves as offering something very different from Cirque De Soleil: “In all of the shows we’ve created, we really want to create a real connection with the audience and to do that we really feel like we have to be quite honest on stage so we don’t really wear fancy costumes and we don’t hide behind make-up or sequins or characters really at all. We’re just ourselves on stage showing people what we do and what we love to do and our relationship to each other. It’s a lot about play and it makes it more real and more accessible to a lot of people.”

It’s been a winning combination that has allowed the artists to live the dream of making a living out of doing what they love. Yet it almost could have ended a few years ago on their first overseas trip as Jascha explains: “We went to the Edinburgh Fringe Festival and we completely intended to stop touring and to stop creating work after this. This was our last hurrah, kind of. We were all going to go our separate ways and go to university and at the Edinburgh Festival we met our agent Wolfgang Hoffmann who is from Germany and that’s when it kind of all began. So we started touring full time almost immediately and never looked back I guess. That was the moment I knew for sure that that could be my job.” 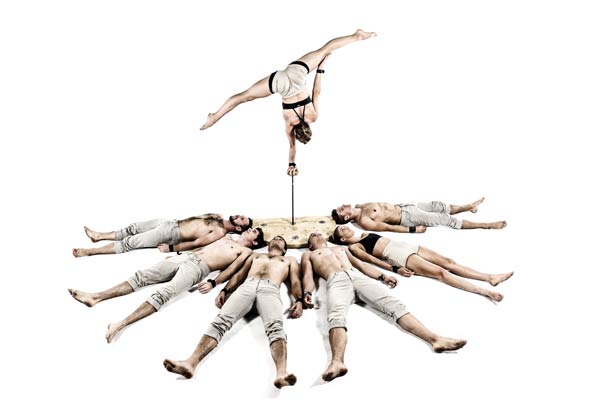 Performing all her life in the art form has allowed Jascha the opportunity to perform a variety of roles. In the company Jascha is a flyer who specialises in hula hoop and adagio but it was not always so. Small for her age when she started, she was initially at the top of pyramids getting thrown in the air a lot. As she developed faster than the boys her same age she became one of the bases, often at the bottom of pyramids and basing the boys who now throw her in the air.

“That’s kind of what’s nice about circus, it kind of fluctuates and there’s so many different roles that you can switch in and out of and I still base a little bit in our new show. I do a lot of the throwing because we’ve got some smaller girls in the company which I really enjoy but I still get thrown a lot as well. So the fluidity of circus is really nice in that way, it’s quite unique in comparison to gymnastics or something like that, there’s kind of a role for anyone at any stage of their lives which is quite exciting and it means we can have this for a career a lot longer than you would expect,” Jascha explains. Trust is such a crucial component of contemporary circus performing where so much is risked and the seasoned circus flyer talks about how important the company’s shared history is. “Our show and all of our shows actually are based around our trust in each other and a lot of that has come naturally over the years because we know each other so well and we’ve worked physically together for so many years as well, so we know the way everyone moves very well and we know sets. So if something goes a little bit wrong, everyone is ready to catch it and I think we really have that trust in each other to know we’re going to be safe no matter what goes wrong, which is a really, really important part of doing circus because you have to have the confidence to go for new things and try new tricks even if you are not quite ready because that is how you progress. If you have people around you that you really trust to make it a safe environment to try those things that’s when you really get to that next level, which I think has been really important for us. We really want to create this family vibe, almost like a traditional circus in that sense. We really like the idea of everyone really knowing each other and really trusting each other and we just think that is the way to create amazing work and also to create amazing living environments when you’re travelling full time with people.” 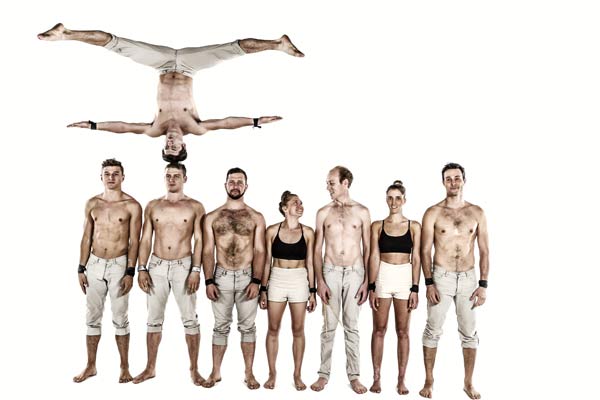 Gravity & Other Myths tend to perform most of their shows overseas and are performing in Perth for the first time. “We’ve never been to Perth Fringe so it’s very exciting. We’ve been pushing more and more to have a real connection to the communities that we perform in anywhere in the world. So that can be through any number of ways. We often offer workshops with other professional circus companies that are based in the area... Disadvantaged youth is a big one that we really enjoyed being a part of as well. We often do questions and answers after the show so people get to know us a little bit more. We try and really engage in any way that we can.”