The Man From Earth: Science Fiction On Stage In Adelaide 'The Man From Earth'

The premise for Jerome Bixby’s film, 'The Man From Earth', first arose in the screenwriter’s mind in the 1960s; there it sat and incubated for 38 years, and was completed in his dying days in 1998.


In 2007, the intellectual sci-fi film about a mysterious university professor’s sudden retirement was finally released. Red Phoenix Theatre, under the directorship of the immensely experienced Robert Kimber, are bringing an adaptation of this cult classic to the stage at Holden Street this August.

'The Man From Earth'’s lead character, John Oldman, is a history professor. Has your insight gleaned from your time as a university academic assisted you in creating an authentic atmosphere?
My word. I recognise the characters in people I have known well both in American and Australian universities. They all have their special quirks and vanities. I enjoy directing a piece that brings these people to light. In the circumstances I hope their interrelationships prove convincing – and that the situation in which they find themselves develops logically, thus proves authentic.

Your career has spanned across genres, including opera and musical theatre. This work is science fiction. What appeals to you about this genre?
It’s a good drama with curious twists in perception, ironies in the arguments, and certainly in the climax of the work. It’s a bit like a jigsaw in some ways. The path is unpredictable, which is a positive, while the characters are rational and sensitive. They are the kind of people our audiences might well recognise in themselves.

What are the main intellectual themes of this work?
The theme of the play can be reduced to 'moving on'.  Tomorrow – one week, one year, ten years –  is an unknown for all of us. We have resources, we have life, but we cannot be sure where they will take us, irrespective of our optimism. In that sense 'tomorrow' is a wilderness.  Our play is set on the edge of the wilderness. Every ten years John Oldman moves on. As a consequence, the force that creates life and of course that ultimately results in death are both subjects for this piece. That a character might be able to deny them provokes a good discussion of many of the issues that come into play around them, especially religion. 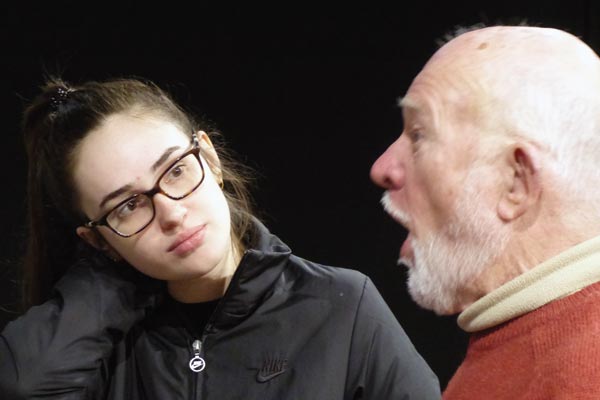 Your PhD thesis was on performance space as sacred space. What techniques have you used to create a space where your cast can reach their fullest potential?
Indeed. I’m impressed that you have discovered it. Thank you. The theatre company have started from an empty space at the edge of a wilderness – and taken it from there. Much of my thinking about space I now take for granted – based on the Australian Aboriginal, Native American Indian and Aztec cultures I have studied. I think that’s to be expected. Like any cast for a good performance, they have to believe in their environment and in what they are doing there. Primitives do just that around any water hole they consider sacred. That’s a test any performers should face in any play, no less than 'The Man from Earth'.

'The Man From Earth' runs from 16-25 August at Holden Street Theatres.

Tweet
« Perplex: Questioning The Nature Of Reality In Adelaide Playhouse Creatures In Brisbane: A Production Born From Modern Love »
back to top