The sheer scale of this production is in itself a monumental achievement and it is not surprising that it has taken two years and a team of more than 100 for it to be realised. With only two speaking cast members, the task of decoding and interpreting Calvino’s ephemeral novel and creating a language from its text is as challenging as the production itself.

Briefly, 'Invisible Cities' centres on the mythical and uncomfortable relationship between the young explorer Marco Polo and Kublai Khan, the unpredictable emperor warrior who ruled the vast Mongolian kingdom from 1260 to 1294. Held hostage by the often raging emperor, Marco Polo can not be free until he’s described each city he has visited. City by city, the young adventurer must rise above the language barrier between himself and the emperor, to describe the mythical places that he claims to have seen – detailing Zenobia, a city of joy; Beersheba, a celestial city of gold; Isadora, a city of memory, and Dorothea, a city of promise, seduction, and desire.

During these otherwise static conversations, Rambert’s 21 dancers bring the locations to life, delivering a stunning visual spectacular that creates a whole new dynamic to the story, with award-winning Belgian choreographer Sidi Larbi Cherkaoui proving why the UK company is considered one of the most exciting in the world today.

Staged in a huge disused warehouse on Brisbane’s south side, 'Invisible Cities' is not so much a play per se, but a huge theatrical monument dedicated to performance art. This collaborative masterpiece sees director, designer and video artist Leo Warner join forces with writer and performer Lolita Chakrabarti, and composers Dustin O'Halloran and Adam Bryanbaum Wiltzie to forge an entirely new art form. 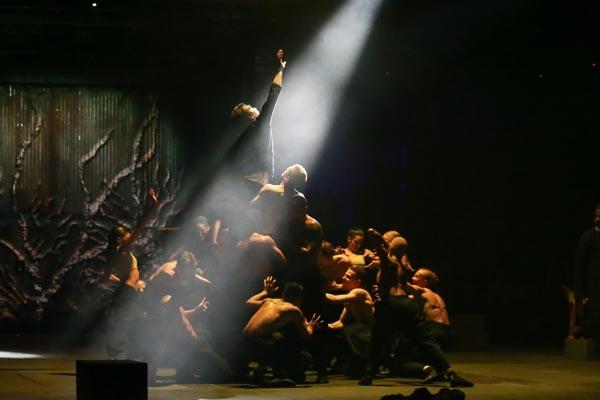 
Film and stage star Danny Sapani ('Black Panther', 'Star Wars', 'Timecode II') is masterful in the role of the ageing Kublai Kahn while Matthew Leonhart – best known for his short film credits – delivers a fully-developed and well-rounded character as the captive and anguished Marco Polo. Together they deliver a mesmerising exploration of language, desire, ambition, hope, trust, and the dreams of mankind.

The stage design is mind-blowing and the set changes simply baffling in their complexity and speed. Mechanical curtains that divide, hide and reveal each new chapter and setting also act as huge screens onto which Leo Warner projects his images. Often referred to as the pioneer of ‘live filmmaking’ in theatre, the sheer scale of these projections is simply jaw-dropping.

'Invisible Cities' is a fantastical journey into the unknown, and an exploration of what is possible in live performance. To say this is groundbreaking, visionary, and a triumph in creative expression would be an understatement – it is more than that. It is testament to what can happen when some of the most talented creative minds in the world come together to make the impossible and the unimaginable a reality.

Brisbane Festival Artistic Director David Berthold (who retires from the role this year), deserves special recognition for taking the plunge and being the first co-producing partner with Manchester International Festival. It takes faith (and nerves of steel) to get a project of this scale and risk off the ground. This may well be the event that defines his time as AD and the legacy he leaves behind. Bravo and thank you!